To be honest, it wasn’t anything like as bad as I’d expected. Not at all.

The room wasn’t a ward, it was more like an Ikea display. There were about 10 chairs a bit like dentist chairs, with drips (or dingly dangly things, as I kept calling them; drips just sounds so lame and pathetic!) a tc, magazines, fruit, drinks etc. And I was the only one in today. I liked that, as it felt like there’s not many people sick! Great!

My first question was whether I should have eaten beforehand – I wasn’t sure so didn’t, but the nurse said it was fine, and promptly offered to make me a sandwich! Peanut butter ok? Awesome, thanks! All good so far!

They’d also told me to bring a book or movies on my ipad, as I’d be there for about an hour. I’ve had Shoe Dog by my bed for ages, but I usually close my eyes as soon as I’m into bed so still haven’t started it! I figured, if anyone is motivational, it’s Phil Knight, so I bring the legend with me. Unfortunately, in my usual fashion, I fall asleep during chemo and only get to page 14, but I’ll stick at it!

Room with a view…

They said bring a book… I brought a legend…

The chemo itself includes two drugs. one’s a bright orange (and turns my pee the same colour!) and the other’s clear. I’m intrigues watching the first one go into my arm, and can feel my arm tingle as it enters my bloodstream! It’s working! It doesn’t hurt, it just feels a bit cold, but the nurse tells me that’s because my body temperature is warmer than the liquid going in So no dramas. The second one is longer – twice the volume. This one’s clear so less interesting. And the nurse warns me that as it goes in, I’ll get a headache behind my eyes, in my sinus. If this becomes too painful, she can reduce the flow rate of the chemo to ease the pain. When it gets painful I tell her, but when she tells me there’s only 15 minutes left, I say ah just leave it, let’s get it in and working asap! In the grand scheme of things, I can stand a headache! 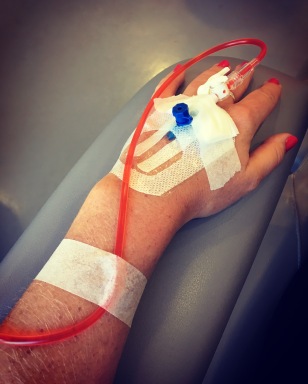 15 minutes later, we’re done and I’m outta there. That was effortless, and within minutes I’m back behind the wheel of my car and happy again 🙂

Right, let’s see what this shit is going to throw at me now…!

Today I start my first round of chemo. I’ve woken up early, and feel totally fine. I’m not scared, I’m determined. I’m not nervous, I’m pumped. And as my trainer reminds me, start strong, finish stronger! So I decide to go for a run.

Now this could be fun – I haven’t run for months and haven’t been to the gym in weeks! I’m also conscious that I don’t want to give my body any aches or muscle repair to contend with, as I’ll need all my strength and energy to fight the chemo from today, so it’s just going to be a short jog…

What’s that pace all about? 9:38 per mile? Rubbish Rebecca! Right, another target! Get my pace back under 9 minutes – not necessarily for the distance or duration I was running before, but even just for a mile or two – it’ll keep me active and boost my energy through this, and I can run on good days and rest on the bad.

But for now, I’m just happy I got out there, job done 🙂

Now, BRING ON THAT CHEMO!

OK so I don’t think Trevor Sorbie’s team in Covent Garden quite knew what to expect!

When I arrived at the salon on Wednesday, they took my coat and seated me in a seat in front of a mirror. Nothing unusual there. Until Alex and Kari showed up, with a couple of bottles of bubbles, and we explained that this was going to be a party, not just a cut & blow. Ah. OK. Well then perhaps we’d better seat you over here in the corner out of the way… Haha! Winner! Our own little corner to cause mayhem! Perfect 🙂

From then on the fun just continued. They started by cutting off the lengths of my hair into many small bands, so I could take these back to Amsterdam to be made into a Toupim (see later post…). This took ages, but they were meticulous and we have both the stylist and colourist working on it together.

After a swift wash, I was back to the chair to find my glass topped up and my hair ready to style. Kudos to Caroline, my stylist – god knows how she was able to concentrate with Alex dancing around her taking selfies, and Kari desperately trying to capture a boomerang of them cutting my hair! But somehow she did, and the result was awesome!

Next, Ben returns and takes over. Somehow he manages to cover my (now short) hair with foils and leaves me to ‘cook’.

At this point, while we’re posing updates to social media, I get a message from my hairdresser from York (who last did my hair on my wedding day) saying she was in London, and which salon was I at? Naturally, invites extended, bubbles topped-up and Gill rocked up to join in the fun – awesome!

Ben then returned to wash out the colour and finish me off. And I loved it! Considering how frightened I was about losing my long hair, I totally love my new short barnet, and even though I’ll only have it for a couple more weeks, I’m loving it already and even considering keeping it short when it grows back?! Watch this space…!

In the meantime, after a few more top-ups, we left the salon after five hours, three bottles of bubbles and a GREAT afternoon! Huge thanks to Caroline and Ben for their skills, tolerance, patience and general sense of fun putting up with us, and making this a great day! 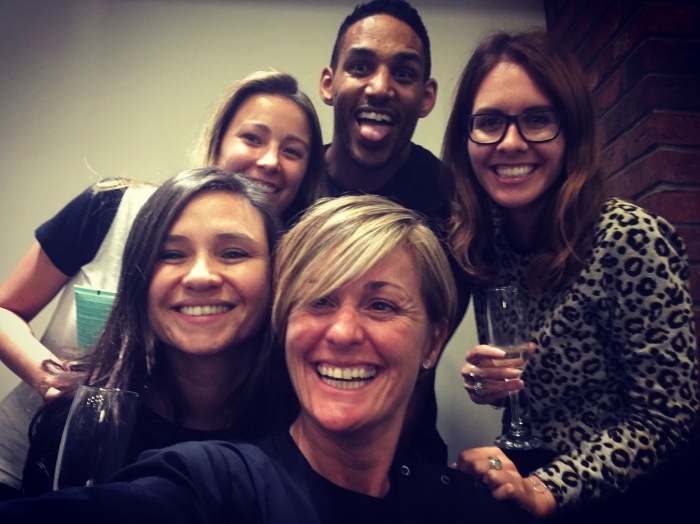 Day… no idea. It’s four weeks and a day since I was diagnosed, but after three weeks of tests, scans, and emotion telling people what’s happening, the past week has been the polar opposite.

Right now, I’m a few thousand feet up over the Atlantic in an A380, heading home from LA after an awesome trip. I’d booked this trip months ago, and when they told me I had cancer, my second question (after “can I keep working?”) was “can I still go to Austin?” At the time, I thought I must go because it’s something I’ve wanted to do for three years so I can’t miss out again! Then as it drew closer, I thought I must go because if I don’t I’ll start treatment in disappointment, vs starting on a high! But now, on my way home from LA, I have all sorts of feelings… I’ve totally switched off from work, daily life etc, and I’ve chilled out, had fun, and enjoyed a great 10 days of feeling totally at ease and happy. But now I’m heading back, it’s all starting to hit home.

When I look in the mirror, all I see is my hair. When I’m on the beach, I just feel my hair blowing in my face, I don’t want to put it up, or brush it, or even wipe it away from my eyes, it can do what it likes, I just don’t want to lose it.

But I know that’s not a choice for me now. It’s going to go, and whilst I could opt to save it,  I’d risk not killing what could kill me. So I’m putting my life before my hair!

That sounds crazy, I know! But until you’re in the position where you’ve no choice, it’s incomprehensible. My best mate shaved her head when she was traveling after Uni. But that was her choice. I’d give anything to keep my hair, except my life. And that’s the crux of it. Sounds crazy but it’s simply true.

So here I am, on a plane, somewhere over the Atlantic, flying home to have my hair cut short, before it falls out, and makes me look like an Alien. Yes, joking aside, I’ll look like an Alien – no hair on my head, eyebrows, nostrils, arms… ok I’ll save money on waxing! But in all honesty, looking good, or even just normal, gives you confidence. And looking bad, or just different, takes that away.

So while I know I’m gonna feel like crap, I’ll fight that and get through it. But knowing I’ll look different, that’s the bit that’s getting to me the most.

I looked different as a kid; I had weird eyes, ginger hair, a spikey barnet and gappy teeth. But as I grew up, I grew my hair and made a virtue of it, and the other stuff didn’t matter. That virtue is now going to go. And I hate that. I’m gonna be the weird kid again. Sure, everyone says I’m strong and am gonna nail this… maybe, but I’m still gonna feel the weird kid again, and that sucks.

So tomorrow I’m gonna put a brace face on it. I’m gonna let them cut my hair. I’m gonna smile and say I like it, even though in two weeks it’ll be gone anyway. But inside, really, this is killing me almost as hard as the cancer is.

Suck it up and style it out Boxy…

So we’re 10 minutes to landing; first stop arrivals lounge for a shower, next stop London Town, Covent Garden, and a date with my girls and a bottle of bubbles as we celebrate daring to embrace a BIG change!