So I haven’t posted anything for a while, but a few people have been asking how I’m getting on. In the past couple of weeks, it’s really been slow progress. A few things have happened, but they haven’t felt significant, so I haven’t felt the need to share. But as phase 3 of my treatment is approaching, here’s a quick update on where we are.

I had surgery five weeks ago today. For the first week, I had clear protective covers on both my boob and my axilla (armpit) wounds. After a week, these were removed by the surgeon, who felt comfortable both were healing nicely. While the boob wound has continued to do  incredibly well, the wound under my arm has been more troublesome.

The night the clear covers were removed, the axilla wound decided to erupt! A large bag of fluid which had been building beneath the surface of my skin started to weep out, stopping the wound from closing. This fluid is called “lymph” – the body generates this to carry good stuff to areas which need to repair, and take the bad stuff away in little vehicles called “nodes”. When you have a large wound there’s a lot of lymph to get rid of, and because I’d had six of my lymph nodes removed, the remaining ones were a bit overwhelmed and the lymph was finding another way to ‘escape’.

At first, the nurses gave me plasters, but the skin around my wounds was so sensitive that the plasters ripped it to shreds – very painful! So I started using absorbent pads and held them in place by wearing tight-fitting clothing. This was where the fun started!

The wound is quite high up into my armpit and not many clothes sit that high up (bras, for instance, have thin straps which sit much further down). Those that do (such as sports bras) were often too tight for me to get into because my shoulder movement was limited (ie I couldn’t lift my arm very high as it opened up the wound) so I had to improvise and the best option I found was crazy! But it worked. Remember the delightful white underpants I was given to wear in surgery? Turn them upside down, cut out the crotch, snip some holes for arms and, hey presto; a stretchy (easy to get into), tight (to hold the pads in place), comfortable cropped top! So the nurses gave me a few of these, some being in a super-stylish mesh fabric, and I’ve spent the past few weeks wearing what look like kinky sex tops!

So I got used to wearing these and re-dressing the wound every few hours. It did start to weep less but it was still not closing properly, so at the end of week three, I went back to see a wound specialist. She suggested that my axilla was ‘hyper-granulating’ (or healing too fast – typical Nike girl!) The red tissue inside was healing faster than the skin outside, and had grown so much it was stopping the wound from closing. The solution? She just dabbed it with a drop of silver and the over-excited red stuff started to shrink back. For the next week this worked and one end of the wound has now closed up nicely, but the other end is still sticking out. So tomorrow I’m going back to see the wound specialist and am hoping she’ll just dab me in silver again and let the wound close properly.

Also tomorrow, I’m going to the Dutch Cancer Centre (“Antoni Van Leeuwenhoek”) to meet my Radiologist. It’s the first time I’ll have seen her since I was diagnosed back in September, and I’m hoping to get more details of what the third stage of my treatment will be like. So far, I’ve been told it’ll probably be around 10 minutes of treatment every day (Monday to Friday) for 21 sessions (so just over four weeks). Likely side effects are tiredness (not as much as chemo) and burning on my skin (like bad sunburn). If this is the case, I’m hoping I’ll be able to start working again! I know I won’t be able to work full time (as I’ll be at radiotherapy every day) and people are telling me not to try and do too much too fast (they know what I’m like!) so I’m trying to heed everyone’s advice and not get carried away! But it’s hard not to, when I’m so excited about getting back to normal! Even if it’s just a few hours a day or a few days a week; just getting back to work will be a huge milestone, and going back gradually will let me catch up on what’s happened while I’ve been off and take back the reins from the teammate who’s been covering my role.

The sting in the tail

However, there is still uncertainty over what my follow-up treatment will be.

Initially, when they thought my tumour was a triple negative, it was suggested that I’d need another 18 weeks of chemo after radiotherapy. This crushed me when they told me, as I wasn’t aware of this at the start and was really feeling like I could see the finish line.

But when they removed the tumour in surgery and had a better look at it, they realised it is slightly hormone receptive, which means preventative (follow-up) treatment could be come from taking hormone tablets for the next five years.

The Pathologist suggested that, given my age (ie I still have a few years left in me!), I should do both (arrrrggghhh!) but as my Oncologist said, it’s easy to say that from sitting behind a desk in Pathology! Ultimately it’s my decision, and if I don’t think the benefits outweigh the impact, then I don’t do it.

This could be one of the biggest decisions I’ve ever made, so in true Boxy fashion, I want to know the numbers!

If your heads are where mine is right now, chemo is not looking likely… If we do it, the benefit will be minimal (1-2%), I’ll be back to blood tests, fatigue, no work, and pretty-much writing off the rest of the year to cancer. And what’s to say that, by the time I finish, there won’t be another new treatment to try? And I could end up spending my life doing preventative treatment to extend my life, rather than living it!

Ultimately, it’s my decision, so unless I learn anything significant in the next few weeks, my head is currently telling me that, once radiotherapy is over, I’m done. I’m seeing the Radiologist tomorrow and seeing the Oncologist on 7th July, so I’ll know for sure in the next few weeks. In tne meantime, I can’t do anything to influence it, so I’m making the most of every day, grabbing opportunities to travel while I can, staying positive and focusing on the finish line, which, right now, I can feel looming fast!

Final push Boxy, let’s do this!

PS – Although I don’t yet know the detail of radiotherapy yet, in my head I have this picture which makes me smile (like the orange Tango slapping cells did during chemo)… Remember Bond asking Goldfinger “Do you expect me to talk?”… 🙂 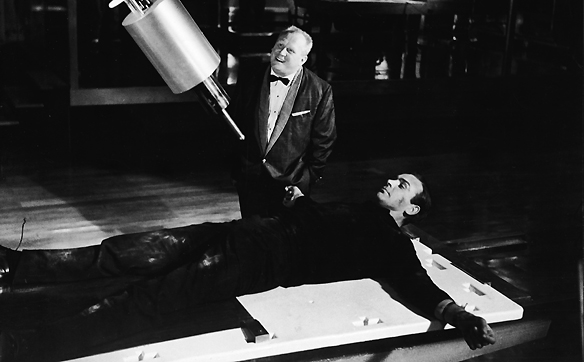