So, how did it go? Well, yet again I feel much better than I thought I would! I’m not really sure what I was expecting, but I certainly don’t feel like I’ve just had an operation!

Who knows, but here’s how phase two is playing out for me so far…

To start with, things were delayed, so instead of going in on Tuesday for my pre-op, I had everything done on Wednesday. When they told me this, I was initially disappointed; if I had to do the pre-op on Wednesday morning, my surgery would be pushed later, reducing my chances of being able to come home the same day. But in fact, it made things better, as I didn’t have time to stop and think about what was happening.

I went in on Wednesday at 9am, and the first thing to happen was a scan. The downside of doing things in another language, is that sometimes things get a little ‘lost in translation’. So there I am explaining to Kari what happens in an MRI, when a nurse comes and shuffles me into the Ultrasound room… erm ok, I don’t mind that – it’s far less invasive and there’s no cannulas – yay! As the image comes up on screen, Nursey is happy that she can see the tumour, and is ready to inject it with dye (so the surgeon can clearly see it when she opens me up). Now I’m not sure how I thought they’d inject the dye other than by using a needle. But when she pulled out this three-inch long needle, I suddenly realized where that thing was going! I may have survived five months of chemotherapy, but my pain threshold is useless – I squeal when plucking my eyebrows! So when I ask if I’ll have any anaesthetic for that thing, and she replies “no”, things start to get real! But nursey explains that the needle is super thin, and I’ll only feel a little prick as it touches my skin. Luckily she was right. There was a funny kind of numbness inside my boob when the dye went in, but all I really felt was a tiny prick, that’s all – happy days!

So while the dye is doing it’s thing, it’s time for more scans… Next, I go into a huge room with an MRI-like machine, where I lie on a conveyor belt and slide into a big round machine. Two scans, one on my back and one on my side. Five minutes for each, no cannulas. The nurse tells me that they need to do this twice, just in case the first scans don’t show the dye properly. So after the first round, I’m taken up to the ward and introduced to my bed.

I change into my delightful blue gown and ‘normal stretch’ pants – hot! – and the ward nurse appears with a pipe. Right. What? I know I’m having treatment in the Netherlands, but a pipe? And it’s smoking? Yes, they actually want me to smoke this thing! We have a few giggles about how to say “puff” in English and there I am, sitting in a hospital ward, wearing a blue gown, puffing away on a bong?! (Apparently, the pipe is a nebulizer to clean my lungs, but I preferred to think of it as a bong.) 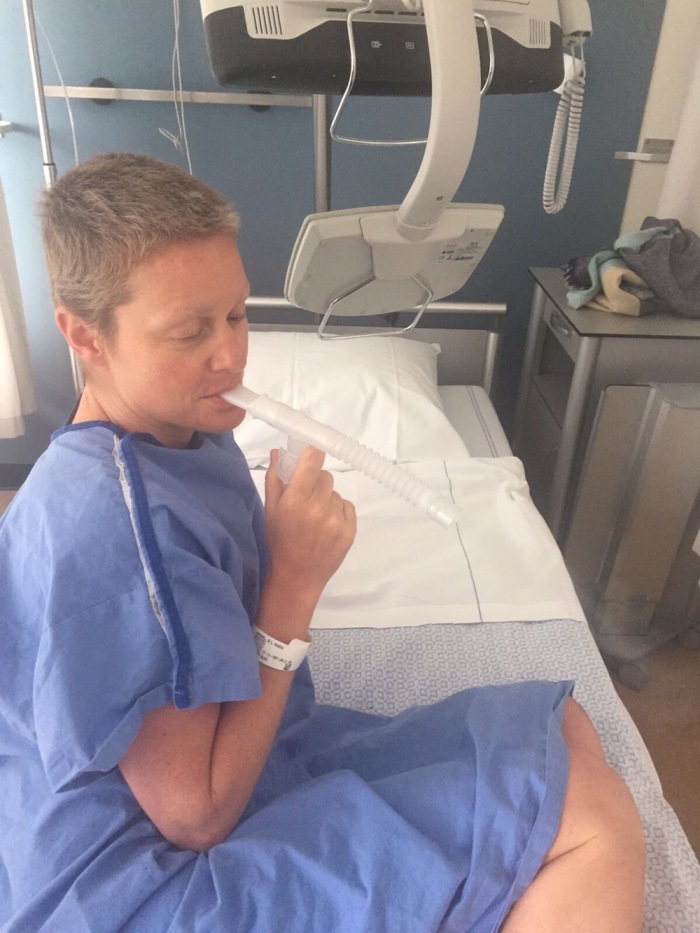 Before long, it’s time to go back downstairs for my second round of scans. This time I’m going down on a bed, so I can go straight into surgery afterwards. OK now this is starting to get serious.

I’m wheeled back down to radiology for the second round of scans, this time with nurse Kari in tow, and we’re trying to figure out how to attach a number 44 to my bed (a la Lewis Hamilton). Every time I’m wheeled anywhere, we describe it as “Practice 1 / 2 / 3” until finally I’m wheeled down to the recovery room – that was “Qually” – to get me ready for surgery, at which point Nurse Kari leaves me.

I’m wheeled into theatre, where I meet David, my friendly anaesthetist. “He’s one of you” I’m told by the surgical staff, “he’s English”. Enter David – a six-foot delicious looking Bristolian, who sounds like Prince Harry. From that point, all I remember is him telling me to think of something nice “like Lewis winning the Grand Prix on Sunday?” I reply. “It does help” he replies “you look like you’ve been on holiday recently, judging by the tan lines?” I blush and acknowledge that the tan lines on my boobs are indeed wonky, thanks to having one boob bigger than the other at the moment. But I’m hoping this is going to put that straight, right? “Of course” he replies “where did you go, anywhere nice?” “Barbados” I reply, and with that I’m out for the count…

Apparently, I was super cold during surgery and they couldn’t get me warm again, so I wake up in the recovery room with a heater over me… Dr Donkervoort, my surgeon, appears and speaks to me… I’m not really awake yet but I think she said she was happy with how it went? Not really sure, I’m still… zzzzzzzzzzzzz I spend the next hour or so dozing and gradually coming round.

Meanwhile, upstairs in the ward, Nurse Kari has been pacing the floor wandering what’s happening – the op was only meant to take an hour, I went down to theatre at 1:30, it’s now 5:30, what’s going on? Eventually, she gets a call to say I’m awake and have been out of surgery for ages (they did try calling earlier, but for some reason didn’t get through to her – she was probably off chatting up some hot anaesthetist somewhere… hang on…?)

I open my eyes at about 6:30 to see Nurse Kari waving through the window like a nutcase 🙂 She comes into the recovery room and they wheel us back up to the ward (the parade lap, obviously). Still a bit blurry and not entirely sure what’s going on, all I can feel is an itchy annoying tube going up my nose spraying cold air into my airway. I have a drip connected to a cannula on my arm, which has to remain in place until I can prove I can pee.

Next – I need to FaceTime mum (apparently, everyone was getting worried when I didn’t come back from theatre, so this call meant more to them than anything).

And finally, food – I’m given the biggest plate of dinner, which I know I can’t eat, but as long as I eat something, they’re happy. So I polish off a beetroot salad and a few mouthfuls of fish. About an hour later I need the loo… “Oh by the way, your pee will be magic for a few days” What? Apparently, the dye they injected is considered a toxin (obviously) which the body needs to get rid of. So I need to drink lots of water to flush out the blue dye – once my pee goes back to normal, the dye is all out and I’m ‘clean’ again. So I go to the loo and, just as predicted, my pee looks the colour of antifreeze!

At this point, the team are happy that I can eat and pee, so I’m allowed to go home.

I’m now home and, over the next few days, I’m sure things will change, so I’ll post again as the wounds evolve!